The canvas is the main editing area located in the middle of the editor where game and app layouts are created and edited. The canvas shows a visual representation of scenes and their actors. Most of your time will be spent working between the canvas and the Properties Panel.

The main canvas contains of the following basic visual aids: 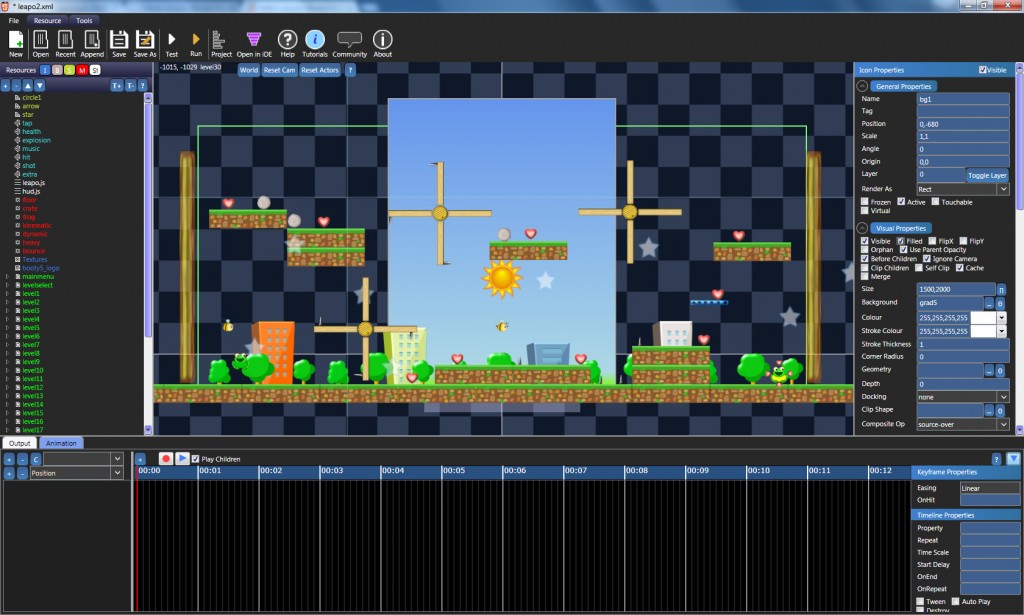 The canvas supports drag and drop from the world tree view. Resources can be dropped onto either the scene / main canvas or actors within the scene. The following drag and drop functions are supported:

Editing on the Canvas

Creating and modifying layouts is done primarily on the canvas, selecting a scene or actor on the canvas will select the scene or actor in the world tree and change the properties panel to show the scene or actors current properties. If multiple actors are selected then the properties for the last selected actor will be shown. You can select multiple objects by holding down the left shift key and dragging the mouse over the objects that should be selected. You can also toggle selections on and off by holding down shift and clicking an object. Note that if you select an actor that is a child of another actor then the parent will automatically be deselected. Clicking on an empty part of the canvas will deselect all objects on the canvas. Note that we use object to denote either a scene or an actor.

The canvas can be panned and zoomed to show more / less of the world. The following mouse actions and keys can be used to modify the camera:

When editing actors or scenes mouse and keyboard actions are:

Other useful actions and keys that can be used on the canvas include:

Note that for key based actions to work, the canvas must have the focus

The Booty5 editor provides a very handy tool that enables layouts to be generated very quickly using cloning. By holding down the left Alt key whilst selecting an actor you can create a clone of that actor or group of selected actors. Depending upon which side of the actor you click, the cloning will be done in a specific direction. For example, if you “Alt + click” the right hand side of an actor then the new actor will be cloned to the right of the clicked actor; cloning also works with groups of actors. The newly created actors will be selected so that they can be cloned in the same direction again. This tool enables rapid generation of environments.

A number of tools are provided in the tools menu to aid alignment of objects by their edges or centres. The following alignment tools are currently available:

A number of tools are provided in the tools menu to aid spacing of objects:

Both sets of tools enable rapid production of tidy layouts, which is especially useful when creating user interfaces.

When moving objects around on the canvas, holding down the left control key will put Booty5 into snapping mode. There are two types of snapping modes supported:

Note that snapping only occurs between objects in the same parent of an hierarchy, so for example you cannot snap a child of one actor to the child of another actor, although you can snap the parents.

The current type of snapping that will be used can be changed from the Tools menu.

You can change the range at which objects will be considered for snapping by changing the inclusion range in the World settings. You can quickly switch between small and large inclusion ranges by selecting Small or Large from the Tools menu. You can also change the distance at which edges will be considered for snapping by changing the X and Y snap ranges in the World settings. Note that you can view World settings by clicking on an empty space on the canvas or by clicking the World button at the top of the canvas.